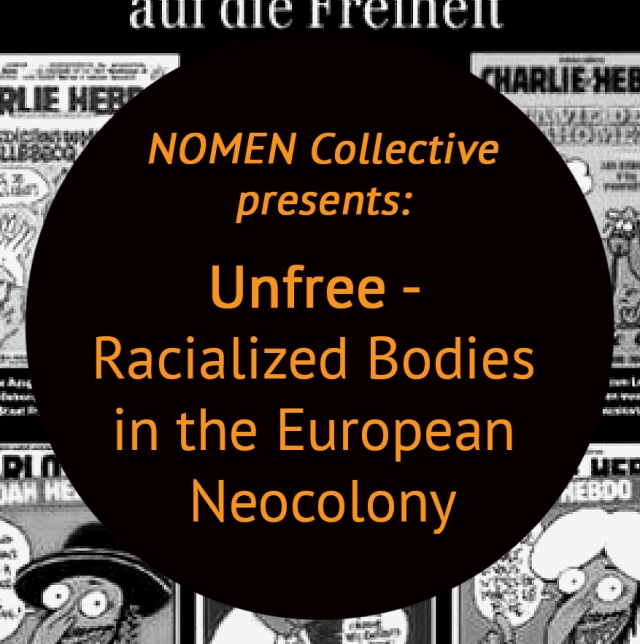 In this exercise day the NOMEN Collective unpacks the notion of neutral bodies in the public sphere by exemplifying racialization in the European Neocolony through three different lab talks and one art performance. European debates around women’s bodies have brought once again to the fore how certain religious bodies are reinscribed as unfree in the secular public sphere; it has also reproduced the racialized female body as a problem that needs further regulation, disciplining and policing. Activists on both sides have contended, that the existence of the (religious) female body is either a matter of choice or of oppression. NOMEN aims at complicating the discourse by demonstrating that an alleged neutralization of bodies is actually marking certain bodies as too religious, too violent, too particular and as deserving to be excluded.

NOMEN Collective will take up certain sentiments, emotions, and sensibilities of racialized knowledge-production, religious positioning, intra-communal struggle as always already complicated by the neocolonial gaze. While we agree, that there is no neutral body, that all bodies are produced and made productive through subjugation and discursive webs of power, we want to highlight the phenomenon of racialization that confines certain bodies in their political agency and fail the promise of political equality. The notion of the neocolonial is important in pointing out, how certain power asymmetries in Europe have older genealogies, but come in a new disguise not by simply exercising brute power or change of political structure, but by turning older colonial questions into questions of culture and cultural normativity onto old and new minority subjects.

We contend that the colony is here and now. Further, that it holds untamed subjects and their performing bodies. We will explore in this exercise, what certain body formations hold and what they foreclose.  The event will have four parts each opened by one NOMEN Collective founding member with a personal story.

This lab deals with the notion of neutrality in speaking and representing in public as a racially marked researcher. By taking the example of  two cartoons from the Charlie Hebdo context, the talk will ask where the line is between race and religion, between satire and hate-speech and who is in charge to decide that.

This lab discusses contemporary notions of the “religious”: How a sphere marked as “religious” is being identified, what kind of practices it is allowed to entail, and what happens to those, who do not comply.

By means of storytelling, this lab critically examines how the Violence against Women-discourse perpetrates colonial narratives that become disempowering and limiting for women of colour affected by violence.  It dismantles the reality that violence against women of color cannot be decontextualized from racism and classism.

Through a four-chapter-performance, Liraz will re-create a process of embodying history/ies and being alive as shaped and shifted by the colonial gaze of German and Israeli nationalisms, and will explore the inscribed past of previous generations of her family in her own body of existence, marking the connection between the personal and the collective.

NOMEN Collective for Ethical Art and Political Practice was established on March 2016 in Berlin. NOMEN aims at the creation of spaces, in which discursive boundaries are blurred through participation, reflection and disturbance. By creating this possibility we want to reframe social issues and claim a political and ethical citizenship. In our actions and general conduct, emotions play a key role. Emotions are not the irrational, embarrassing and private side of us, but rather the substance out of which our political and social concerns are made of. Relatedly, our bodies and the body are the central locus and the starting point to think about political issues. Although as NOMEN we seek to include all genders, sexualities and religions in order to generate political action, our aim is not to dissolve communal ties and religious particularities. Quite the contrary, we aim to demonstrate unresolvable particularity, unspeakable truth in order to generate a new ethical frame for marginalized forms of political and social life. NOMEN Collective is carried by six permanent members: Sultan Doughan, Adi Liraz, Patricia Piberger, Nahed Samour, Armeghan Taheri, Hannah Tzuberi.

Sultan Doughan is an anthropologist and writer based in Berlin for field research for her doctoral thesis. She engages with the question of citizenship, racialization and religious difference for Jewish and Muslim minorities in the field of historical-political education. Sultan is a founding member of the NOMEN Collective.

Adi Liraz is a multidisciplinary artist and curator. Liraz received a BFA from the Bezalel Academy of Art and Design, Jerusalem and an MA from the Art Academy Berlin Weißensee (“Art in Public Context, Spatial Strategies”). She is part of the duo ExDress, member of the Association of Performance Art, Berlin and a founding member of NOMEN Collective. Her personal page is called adiliraz.com.

Armeghan Taheri holds a LL.M. degree from the School of Oriental and African Studies (SOAS), University of London, in Human Rights and International Law. As a daughter of Afghan activists, she learned how to turn legacies of trauma, loss, survival and fight into intellectual knowledge.   Armeghan is a founding member of the NOMEN Collective.

Hannah Tzuberi has a PhD in Jewish Studies and lives with her family in Berlin. She deals with secularism, religious practice and contemporary configurations of Jewishness in Germany.  She is also a blogger: mandolinaforpresident.wordpress.com. Hannah is a founding member of the NOMEN Collective.

*by using the words female or woman we refer to every person who identifies herself as such. The example in the talks, however,  are based on persons who are read as women in public.

How does the meaning of ‘feminism’ change in different contexts and times? And, what can we learn from historical feminist practices? “Feminism”, Yemisi Aribisala writes, “cannot be globally defined because Pangaea broke into pieces 250 million years ago and many wild waters and hazardous bush must be traversed to evangelise my kind of savage. The world is not one.” On the other hand, Science-fiction writer Octavia Butler describes it in terms of the act of writing yourself into the world: “You got to make your own worlds. You got to write yourself in it.”

How do we – women, men, transgender, not-men – write ourselves into the world? And, how do we unwrite an already written page? How do we imagine a different language, another collective politics from the perspective of feminist practice today? When vulnerable communities continue to be threated by racism, xenophobia, acts of bullyism, and violence against women, gay and trans-people, we feel the urge to address these and other questions in an attempt to mobilise and develop new feminist politics and practices.

For this series of preliminary exercises, our point of departure is the acknowledgement of a deep, and we hope productive, disagreement on the meaning of and the contemporary valence of this term. Perhaps this is already what feminism is about, a form of collective non-alignment. Through a series of performative events, talks and workshops, SPEAKING FEMINISMS enacts the multiple histories, struggles, and voices that define ‘feminism’ as both a practice and a concept.

More information about the series here

[Would you like to bring your kids? We will provide a self-organized child care. If interested please send an email until Friday, APRIL 28th, to communications@savvy-contemporary.com with subject line child care and tell us the age of your kid(s). The child care will cost a small fee, the amount of which will depend on the number of children.]